Originally a pure advertising structure, now an advert on offices.

Sign says: “Lucozade Replaces Lost Energy”. It originally read: “Lucozade Aids Recovery” but this was changed in the 1980s due to AIDS awareness.

Many people not from Brentford know it as the sign which welcomes them to London on the M4.

A rare example of Modernist Art or “kinetic sculpture” in advertising, which lights up to make the Lucozade appear to pour from the bottle to the glass. It was originally installed in 1954, on the side of what was then known as the “Lucozade Annex”, demolished in 2004.

The original sign is now in Gunnersbury Museum. A digital replica was reinstalled in 2010, on the side of York Parade, 200metres from its original site.

Here’s the temporary ad, back in January 2010, BrentfordTW8.com

In January 2015 the sign was taken down and replaced with a full screen digital advert. There is a petition to bring it back. 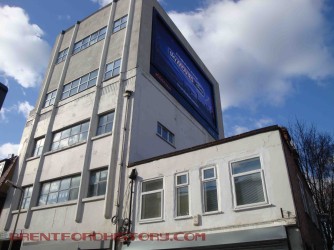