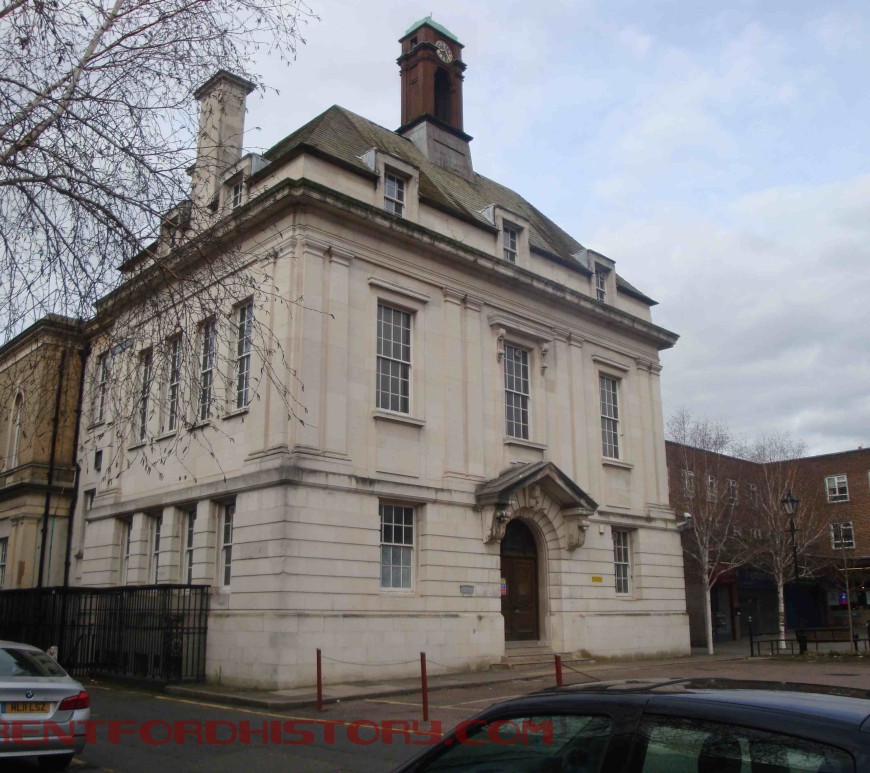 Built in 1850 as a Magistrates’ Court and currently closed for redevelopment.

This was the site of the market in the town for at least 300 years. About 1850 the old Market House on this site was demolished and a Town Hall built as a speculative development by the Brentford Town Hall and Market House Company. It was never used as a town hall and by 1852 it housed the County and Magistrates Courts and the Board of Guardians met there. There was also a library and public meetings were held. END_OF_DOCUMENT_TOKEN_TO_BE_REPLACED

In 1755 the Brentford clockmaker, John Jullion, built a clock for the tower of  the Brentford Market House. The House was demolished in 1849 and the clock was transferred to the new Town Hall that was built on the site. When this building was reconstructed in 1930 (it was by then the Magistrates’ Court) the clock was retained, and it can still be seen from the High Street. END_OF_DOCUMENT_TOKEN_TO_BE_REPLACED

At the end of the thirteenth century the Manor of Boston was given to the Priory of St Helen’s, Bishopsgate by King Edward I. It’s thought that the Priory may have used the Manor as a country retreat and as a place to grow food. Later they were granted a charter to hold a weekly market and an annual six day fair around St Lawrence’s Day in August.

The stalls would originally have been along the High Street – at that time little more than a wide track – but the market flourished due to easy access by river and locally grown produce for sale. By about 1587 it expanded in to an orchard on the north side of the High Street still called Market Place and expanded in to the Butts.

Locally grown produce was sold to merchants from London. Transport links by road and river were good and the carts and boats carrying  fruit and vegetables returned filled with what was politely called ‘night soil’ which was used as fertiliser. Baskets for carrying the fruit and vegetables were made locally from the osiers cut from the willow trees grown on the aits or islands in the Thames. END_OF_DOCUMENT_TOKEN_TO_BE_REPLACED