“May 24 was a mild, overcast day with no hint of the heatwave to follow that long, hot summer of 1976. It was the day 400 women voted in West London’s Boston Manor Park, to take strike action for equal pay.” (Sally Groves) In 1976, one of the most far-reaching equal pay strikes was successfully won at the Trico-Folberth factory in Brentford. An American company … END_OF_DOCUMENT_TOKEN_TO_BE_REPLACED

Chiswick Library holds a wealth of ancient books, paintings, newspapers and other reference documents charting the rich history of the area in its little seen Archives. James Marshall, Local Studies Librarian for Hounslow Library Service opens up the Archives to ChiswickBuzz and gives a glimpse into the treasure trove it holds! Hidden Gems Part One (video) Hidden Gems Part Two (video) Local Studies at Chiswick … END_OF_DOCUMENT_TOKEN_TO_BE_REPLACED

An eagle-eyed volunteer spotted an inscribed pottery fragment whilst sorting through hundreds of pieces of pottery shards found in the 1970s in an excavation on Brentford High Street due to road widening.

The fragment is inscribed with the chi rho, the first two letters of Christ in the Greek alphabet, which was a common symbol in the early Christian church. END_OF_DOCUMENT_TOKEN_TO_BE_REPLACED 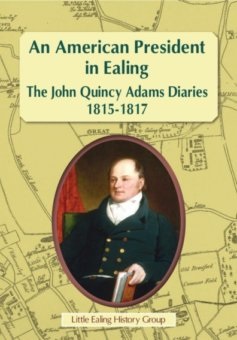 It’s not Brentford, but it is next door and does refer to Brentford. It’s also a very well produced book that is attractive.

The Little Ealing History Group has published a unique local history book based on the diaries of John Quincy Adams, a leading nineteenth-century American statesman and diplomat. A serious man with a strong sense of public duty, he was elected the sixth President of the United States in 1825. Between 1815 and 1817 he served as the United States representative in Great Britain and lived with his family at Little Boston House on the border of Ealing and Brentford in West London. END_OF_DOCUMENT_TOKEN_TO_BE_REPLACED