Residences, both Victorian and Edwardian.

Groups of attractive villas and houses. Some have cast iron posts on the corners of the windows like some in Whitestile Road and O’Riordan’s Tavern.

No 17 is four stories with impressive steps up to the front door with window above.

In 1900 it was occupied by Mrs Dorey and owned by Dorey & Co who were a local building company through the late 19c early 20c. Mr Dorey was a local councillor and built a number of the local civic buildings. It’s likely that he built this house for his own family. It is possible (although not confirmed) that the gap in the terrace opposite is deliberate in order to not spoil his view. 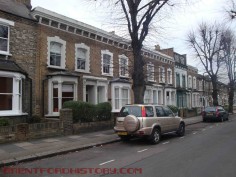