Piece of local history from the industrial 1930s.

The Jupp Family traded in Brentford from 1826 until c1940 as coal merchants and later corn, hay and malsters merchants. They were able to load and unload undercover after the building of the overhanging warehouse. The premises was later used by Tunnel Portland Cement Co. Ltd.

As of September 2013, under threat of demolition 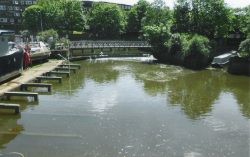